The Kiez, the Spandauer Vorstadt

Berlin's first mention was in the middle of the 12th century. After the Thirty Years' War (1618 – 48) a bastion with a fortification was built as protection, 13 gates were built around Berlin. The most famous was and is the Brandenburg Gate, from 1735 on the fortification was demolished.

The story of a corner

City tour through the neighbourhood

Culture tips from the area

is located in the middle of the Spandauer Vorstadt, which means: city at the gates of Berlin in the direction of Spandau.

Protestant parish church it was built in 1712 – 13 as a classic Brandenburg parish church. 1729 – 35 the only preserved baroque tower of the city was added, in 1892 the Sophienkirche was extended and rebuilt in new baroque style, the old entrance in Sophienstraße was moved to Große Hamburger Straße. 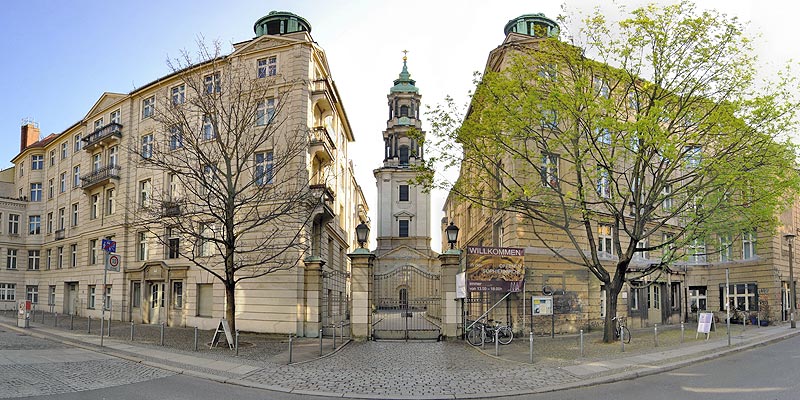 was founded in 1829, from 1941 the Gestapo set up a collection camp in the old people's home, more than 50 000 Jews were sent from here to be deported and exterminated, in 1945 it was destroyed.

This memorial – as well as the one in the memorial of the women's concentration camp Ravensbrück - was created by the artist Willi Lammert.

oldest, demonstrable cemetery of the Jews in and near Berlin, 12000 people were buried here by 1672 – 1827 In 1943 splinter trenches were dug on the orders of the Gestapo and this site was destroyed. In 1945 the dead were buried again, 2500 people, war victims from surrounding streets. 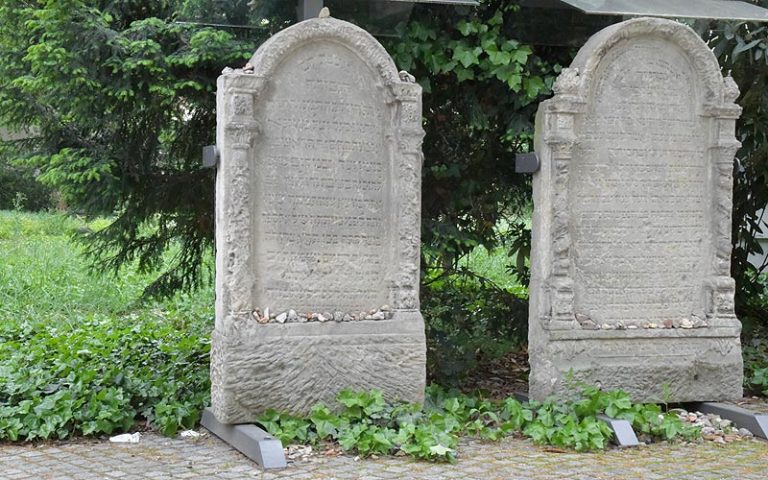 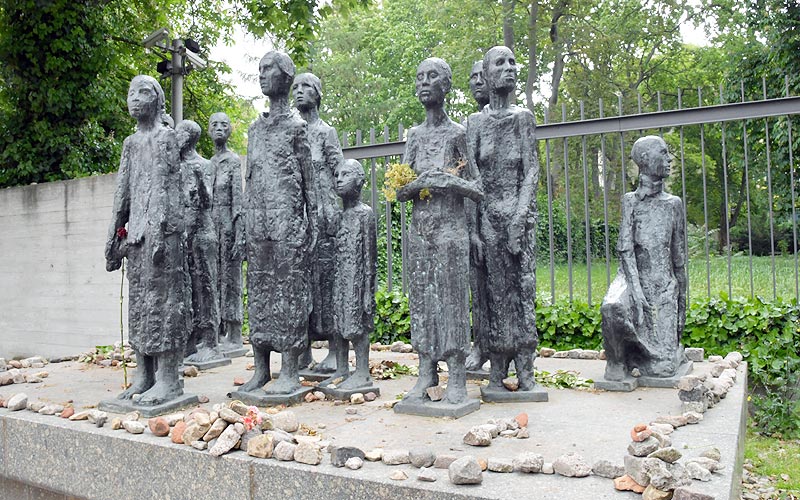 Opposite the memorial, there is a gap in the gable of a house where the names of deported Jewish inhabitants of the quarter are mentioned.

Koppe died in 1721, in 1755 the city donated his funerary monument, which Stüler erected, it is probably the only street grave outside Italy. 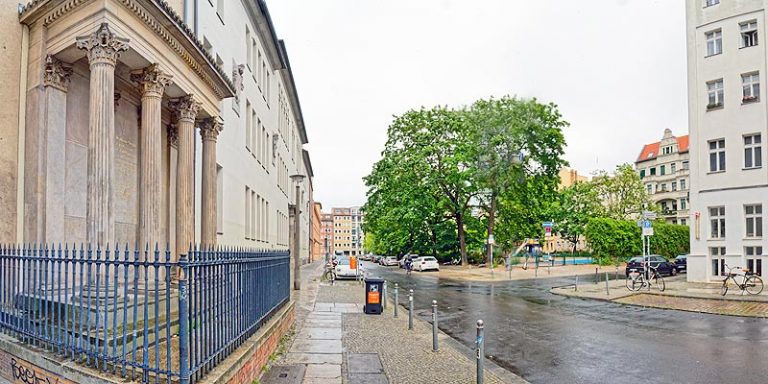 1902 – built in 1907, typical for his school buildings are the clock tower and many animals in the building. Today this building is used by theatre groups.

located just behind it, it was built around 1850 for widows and daughters of higher officials. 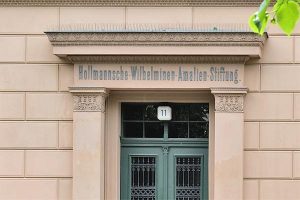 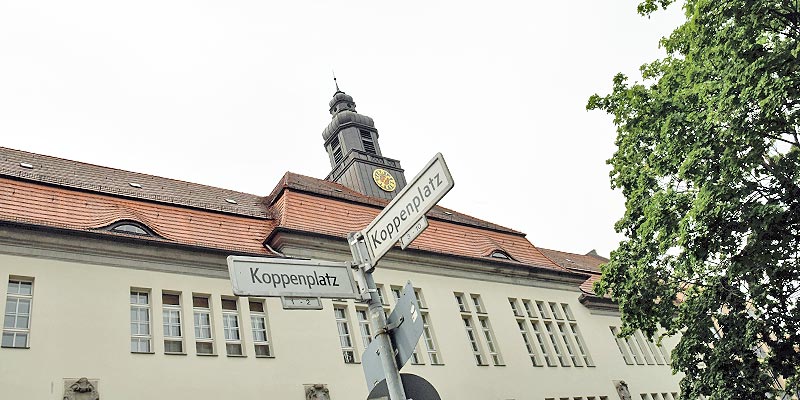 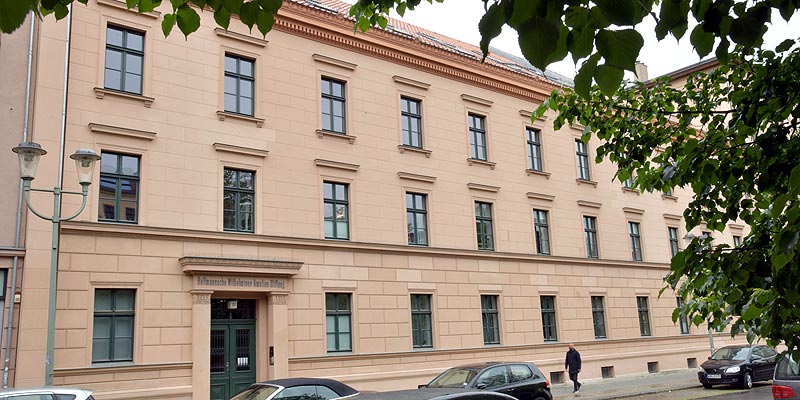 a former trade route through the Feldmark in the direction of Oranienburg, it was laid out as an army road, hence its size

which means „…my gem“. In the middle of the 17th century here was the electoral garden, after further rebuilding in 1717 it was considered the most beautiful palace of the residence, after war strikes it was demolished in 1960.

in the castle park was consecrated in 1885 and used until 1939, in the fifties it was demolished.

What remains is Monbijou Park with the children's outdoor pool.
During the summer months, the open space opposite the Bodemuseum is transformed into a dance floor. Salsa evenings and tango-milongas take place here regularly.

Built in 1866 by the architect Knoblauch, it was supposed to be set on fire by the Nazis, but the then district chief Krützfeld thwarted this plan. In 1943 it was badly hit by air raids, from 1988 the preserved remains were restored to stand the test of time as a reminder. 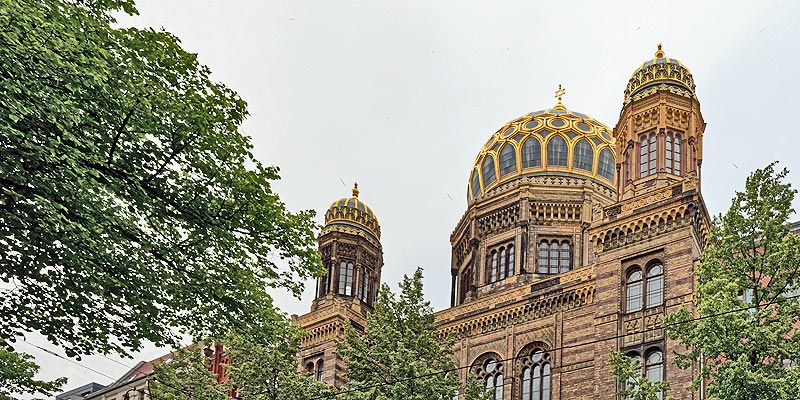 at this place stood (1705) the postillion house. The architects Tuckermann and Schwatlow built a representative new building in 1875 – in 1881, the main room was used by the CO GALLERY as an exhibition space until 2014.

same style and architects, destroyed in the war, the new building served in the GDR – times as the Institute for Telecommunications. Today an area with offices and luxury apartments is being built here.

1910 – In 1913 this five-storey telephone building was built in baroque style as an extension of the parcel post office, including the former lodge house.

with classicistic facade, since 1791 religious house, sold to the Reichspost in 1898. Restored in 1962, both keystones left and right of the entrances have been preserved,
Socrates on the left and Seneca on the right. 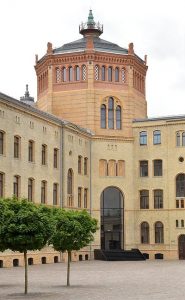 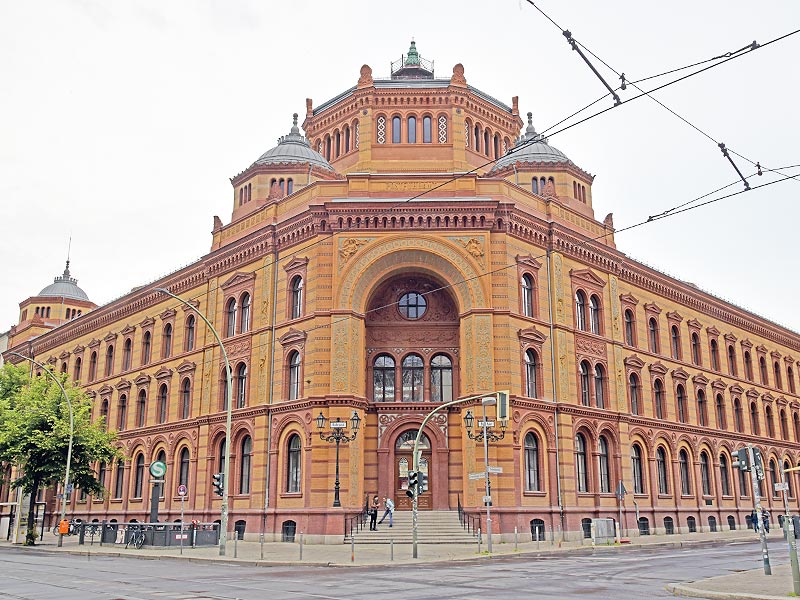 The Heckmann-Höfe connect the Oranienburger with Auguststraße. 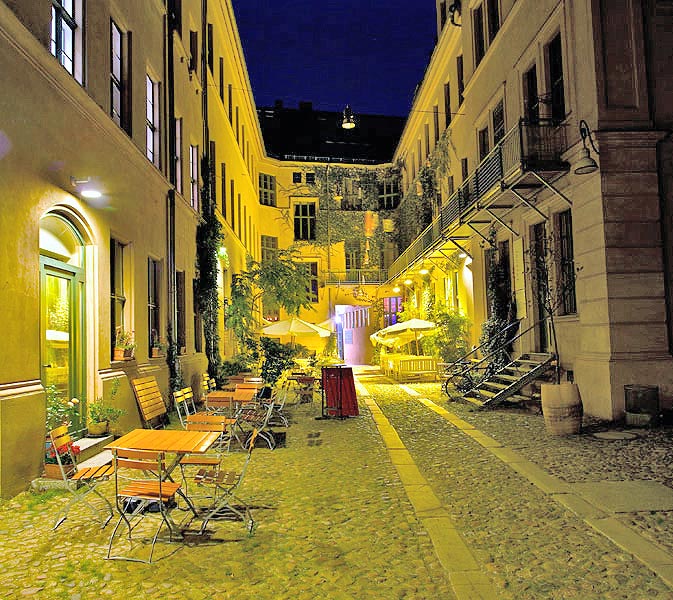 This street is known for its countless galleries (including gallery „eigenart“, the „KunstWerke - KW“). which were created here especially in the post-reunification period. Juta Weiz, former employee of the WBM, had a very large share in it. 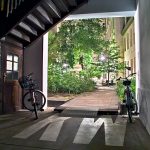 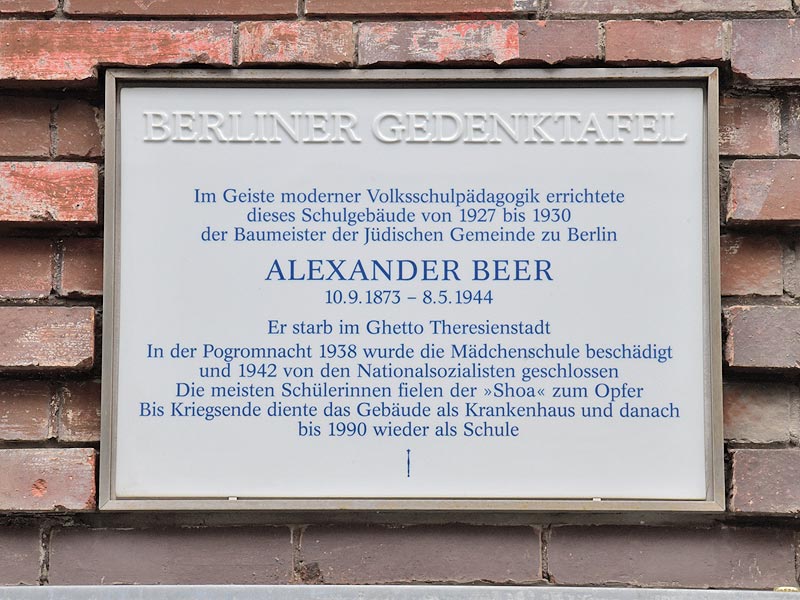 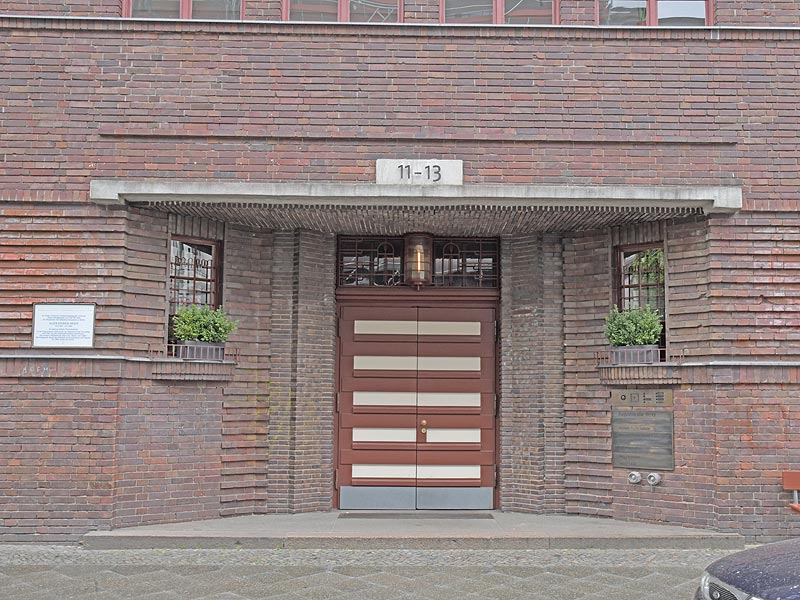 In former times it was also called Kirchgasse or Kirchhofgasse, it was externally restored for the 750th anniversary of Berlin 81987). Here you can still find small two-storey Biedermeier houses, opposite the old main entrance of the Sophienkirche is the former entrance of the Handwerkervereinhaus, in its courtyard are the famous Sophiensäle, which were unique in their size in the suburbs. 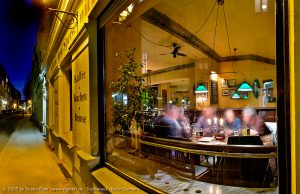 The new building of the workers' organization was built here in 1905, the house served educational purposes, in the yard there were several large halls, the largest one could hold 3000 people. Because of the ban on assembly, political organizations and parties from all camps met here. In the 20's and 30's the wrestling clubs held a rendezvous, a kind of criminal society, they supported e.g. the women and children whose husbands were in prison. 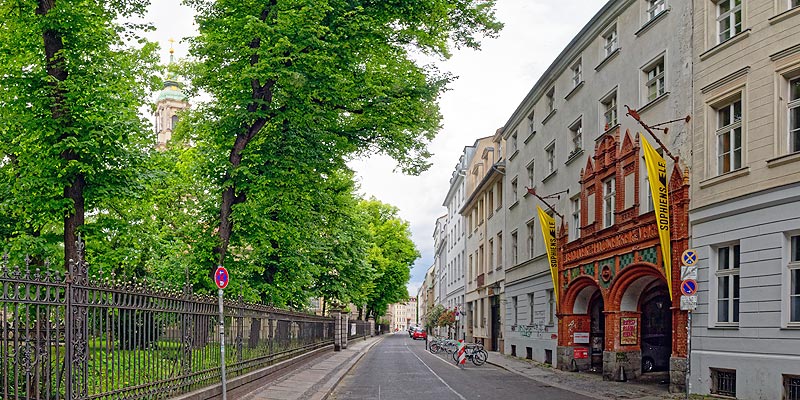 Around the Hackescher Markt

here are 8 farms, at that time the largest farm complex in Europe, 1906 – built in 1907. Here one should live and work, there were many small factories, stamp, rubber and shoe manufacturers, a wax factory and the like. Today there is a mixed use of industry, cinema, theatre and apartments. 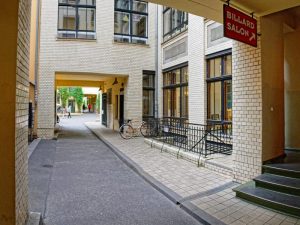 The name comes from the novel "Republic of Schwarzenberg" by Stefan Heym and is about the town of the same name in Thuringia. At the end of the war in 1945 an independent republic was proclaimed for a few days in Schwarzenberg. The place was forgotten by the Allies during the division of Germany into occupation zones.

This ensemble of farms is just as special in the area that is now mainly used for commercial purposes.

Occupied by artists during the reunification, it was acquired by the housing association and could be given to the e.V. Haus Schwarzenberg for use. Thus an important cultural centre in the Spandauer Vorstadt was preserved.

In addition to studios for artists, there is a highly recommended bookstore with a gallery (e.g. with unique pieces and small editions of various artists' catalogs), the museum „Stille Helden - Bilndenwerkstatt Ottto Weidt“, the Anne Frank Center, a cinema and, as a special highlight, the Monsterkabinett (bizarre fantasy figures as mechanical dolls). 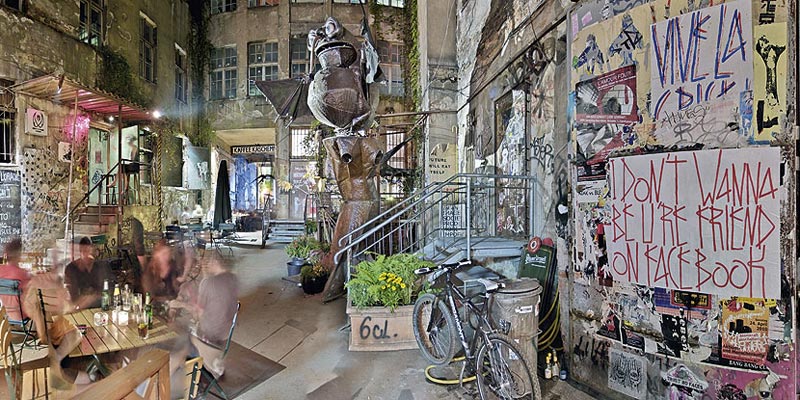 this road was built along the city wall, it follows the course of a narrow path below the fortification, clearly visible at the bend in the road.

The house at the beginning of the street on the corner, the red pharmacy, Berlin's oldest, the interior design dates from the Wilhelminian period.

The third house, the 1890 / 91 built „Volkskaffeehaus“, in the front house and in the side wing were large halls with cheap coffee bar, in the courtyard there was a cinema and a bowling alley. 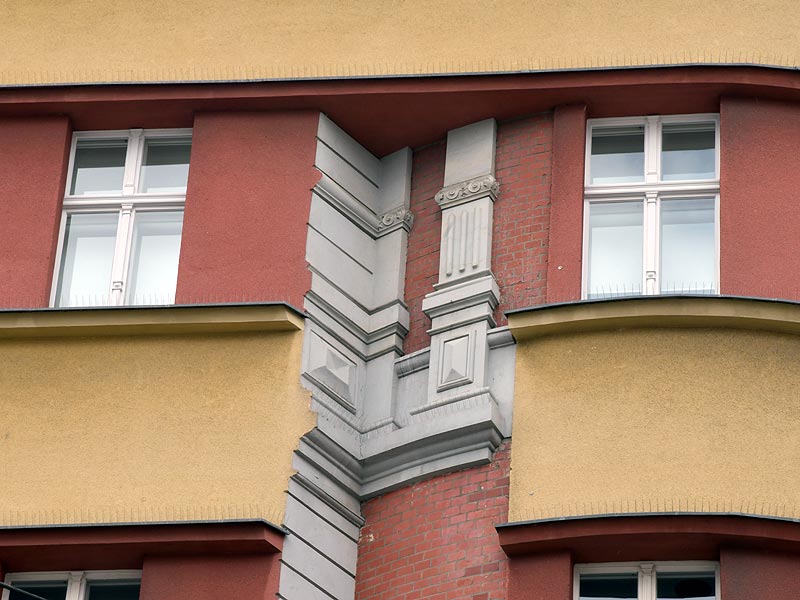 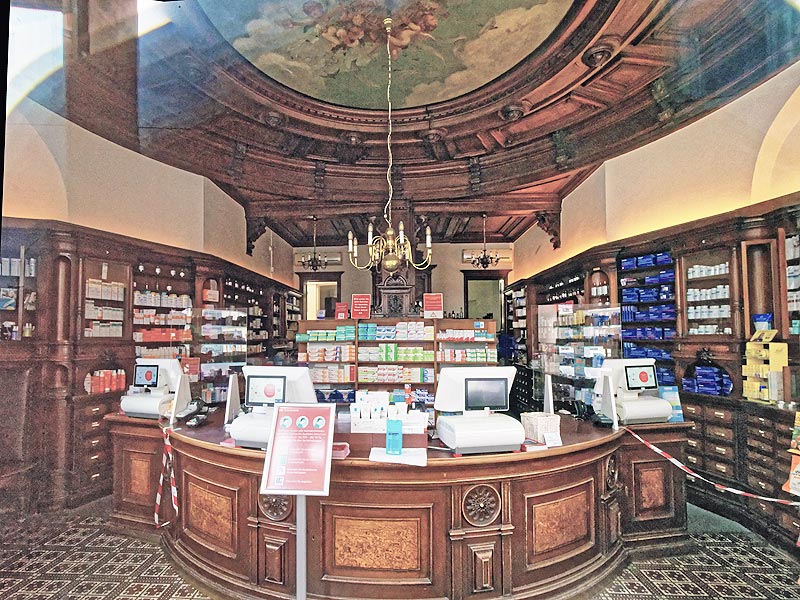 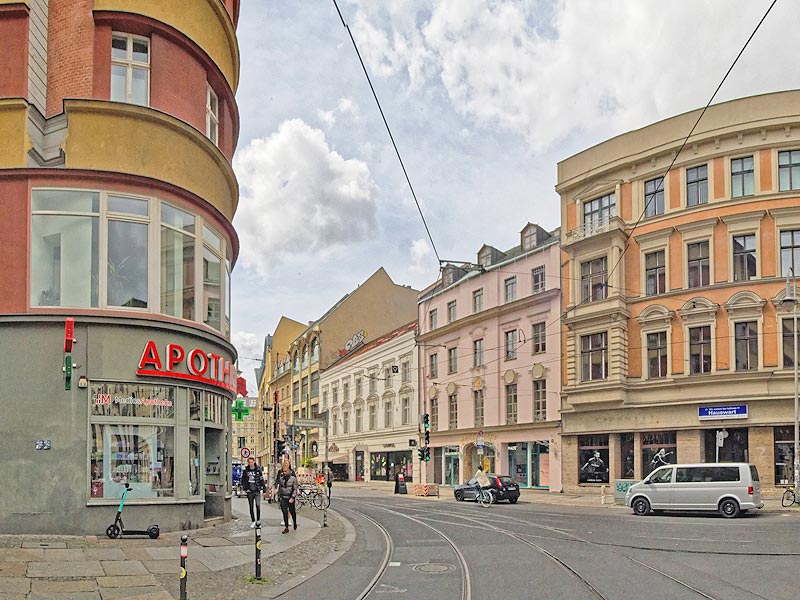 situated at the eastern end of Auguststraße, among other things with the grave of Clausewitz,